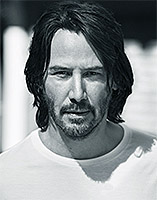 Keanu Reeves was born on September 2, 1964, in Beirut, Lebanon, and was raised in Toronto, Canada. He first gained attention for his performance in River’s Edge, while the comedy Bill & Ted’s Excellent Adventure and its sequel, Bill & Ted’s Bogus Journey, brought him major recognition. Reeves has developed an eclectic film roster that includes the action flick Speed and the sci-fi blockbusters The Matrix and its sequels, as well as more art-house fare like My Own Private Idaho and The Private Lives of Pippa Lee. Reeves made his directorial debut in 2013 with Man of Tai Chi.

Keanu Charles Reeves was born on September 2, 1964, in Beirut, Lebanon. Of Chinese-Hawaiian heritage on his geologist father’s side, Reeves’s first name translates from Hawaiian to English as “cool breeze over the mountains.” Reeves’s mom worked in entertainment as a performer and later a costume designer. Upon his parents’ split, the youngster moved with his mother and sister to New York and then Toronto. Reeves developed an ardor for hockey, though he would eventually turn to acting, garnering TV roles and making his big-screen debut in the 1985 Canadian feature One Step Away.

Soon after, Reeves was featured in U.S.-oriented teen movies such as Youngblood (1986), starring Rob Lowe and Patrick Swayze, and River’s Edge (1986). More television and film roles followed before Reeves joined the ensemble cast of the scandalous period drama Dangerous Liaisons (1988), starring Glenn Close and John Malkovich. The following year marked the release of a film for which the young actor would become associated with for quite some time—Bill & Ted’s Excellent Adventure. Co-starring Alex Winter, the popular comedy followed two high school students and their time-traveling high jinks, eventually spawning a 1990 animated TV series and the 1991 movie sequel, Bill & Ted’s Bogus Journey.

Though Reeves would often face criticism for his deadpan delivery and perceived limited range as an actor, he nonetheless took on roles in a variety of genres over the ensuing decade, doing everything from introspective art-house fare to action-packed thrillers.

At the close of the decade, Reeves starred in a sci-fi film that would become a genre game changer—The Matrix. Directed by Andy and Lana Wachowski, the 1999 movie followed Reeves as prophetic figure Neo, slated to lead humanity to freedom from an all-consuming simulated world. Known for its innovative fight sequences, avant-garde special effects and gorgeous fashion, The Matrix was an international hit. Two sequels were filmed together and released in 2003 to a more mixed reception, though the second installment, The Matrix Reloaded, was a bigger financial blockbuster than its predecessor.

Even with mainstream success, Reeves continued working in different genres, as seen with his roles as an abusive man in The Gift (2000), starring Cate Blanchett, a smitten doctor in Something’s Gotta Give (2003) opposite Diane Keaton, and a Brit demon hunter in Constantine (2005). Reeves returned to sci-fi as alien Klaatu in the 2008 remake of the classic The Day the Earth Stood Still, co-starring Jennifer Connelly and Jaden Smith.

The following decade saw the actor making his directorial debut with Man of Tai Chi (2013). Martial arts–based themes continued in Reeves’s next feature, the widely panned 47 Ronin (2013), which was followed in 2014 by the more critically well-received John Wick, co-starring Willem Dafoeand John Leguizamo.

His artistic aspirations not limited to film, Reeves co-founded the band Dogstar in the early 1990s. Dogstar enjoyed modest success, releasing two albums during Reeves’s decade-long run as its bass player. He later played bass for a band called Becky for about a year.

Reeves is also a longtime motorcycle enthusiast. After asking designer Gard Hollinger to create a custom-built bike for him, the two went into business together with the formation of Arch Motorcycle Company LLC in 2011.

Reported to be one of the more generous actors in Hollywood, Reeves helped care for his sister during her lengthy battle with leukemia, and has supported such organizations as Stand Up To Cancer and PETA.